Hello!  I decided to step out of Totally Irreverent Weekly Recaps mode and write a full-blown column for a change.  At first, it was going to be a “Watch the Soaps With Katrina” column, but I’m twenty minutes into AMC and haven’t found anything worth comment yet, so I guess I’ll be winging it!

So just when I’m saying that, in walks Loretta’s Bridal Emporium and we get two fantabulous Brooklyn gals of my dreams.  Of course, we have to deal with this: 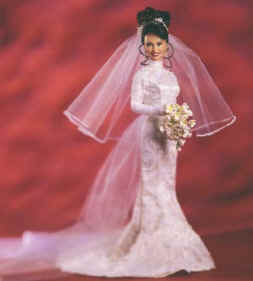 The Erica Kane doll.  Of course, she couldn't condescend to put anything ON her satiny, pampered skin that is off the rack, but you get the idea.  We also got our second dose in a week’s time of what a down home, just-like-us girl Eric really is.  Bleh.  “See?  I can be Dallas AND Dynasty!!”  Pfft.

Like Mama, like daughter, Bianca is just a bitch!!  I couldn’t believe she broke into Kendall’s room, especially after she saw that Erica got arrested for the same thing.   Then BOTH of these felonious hags have the nerve to berate and attack Kendall when they are busted in the act!  I have NOTHING left for these two and I hope they stew in their own wretchedness and continue to be blighted by ongoing soap opera shit.  They deserve one another.

Whoever is doing the interior decorating for AMC needs to have a seat in Old Sparky while we turn up the juice enough to take out the electricity in the entire Eastern Seaboard.  Between Erica’s new gilded cage and the cow rugs and the candy cane striped chintz, I feel like I need protective glasses to watch the show.  On the other hand, I would love to have an hour to grab whatever I could from Wildwind and make a run for it!  Medieval castle is just my gig!!  The cool thing is that if your house is goth enough, no one cares if there are cobwebs and dust everywhere.  It looks Witchy and eccentric and not microcleaning actually helps the ambiance.  You just gotta like that!

David has been an interesting case lately.  You can really see how much he loves Anna and that he wants to be good, but that God complex and his past mistakes just keep popping up to take a bite out of his ass.  I loved the scene where the two of them make love for the first time (well, in recent history, anyway) and he kissed her little tummy bump.  I loved the scene where she told him they were having a little her and the joy on his face was radiant.  Of course, this came on the tail of him blackmailing Maria with the bait of getting her memory back.  That was fairly despicable and it takes a lot to get me to agree with Edmund and Maria.  I can understand in David’s head why he did it, but in the World of Society, as acts go, that one was pretty low.  You’d think since his drug took out her memory, he could at least fix it with strings.

I have a feeling I like Maureen a lot better than I’m going to like Maria.   I think Edmund is like a brain sucking machine that docks into her as soon as she’s within 100 feet of him and Lord knows there isn’t much of a chance that he’s going to let her out of range.  He might as well put her on a leash.

Why is it that whenever I see Kendall making out with JR, I imagine how funny it would look if Jesse McCartney was still playing him.  They’d have to give him a box to stand on to kiss her.  I could buy it a bit when Jonathan Bennet was playing him because the chemistry was actually pretty good and he was quite a looker.  Now we’ve got Boy Next Door Best Friend’s Brother behind the wheel and he looks like he should be leaving a $50 bill on the dresser and thanking her for introducing him to the ways of luuuuvvv.

Between the new Jr, the new Jamie (wasn’t baseball camp just last summer??) and the token girlfriends, we have completed the raid on the Alfred E. Newman High School drama department.  Can they go back now please?  Didn’t the bell already ring?  When I was a teen watching GH and OLTL I despised teen stories and it still holds true.

What would MY dream scene be that ABC has never and will never tape?  Pick any show, preferably GH or AMC, and put the characters on high, padded stools on the stage with Dr Phil asking, “So how’s that workin’ for ya?”  Then just let the improv roll. 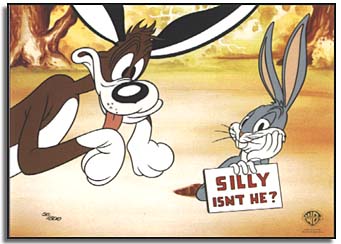 I LOVED the, I dunno, I guess you’d say “confrontation” between Mitch and Bo, which reminded me of the Tex Avery cell above.  “Totally irrelevant, but impressive!”  Bo is so out of his league it’s not even funny.  OK, yeah it is.

Somehow, I just knew that when Troy takes a nap, he doesn’t wear thermal undies and crawl up under a down duvet.  I knew he’d be in boxers, draped Michelangelo-ishly across his davenport with much, much skin exposed.  Yep.  Thought so.

So WHAT was with those aborigine saucer earrings Flea was wearing when she was counseling Ned?  Jeez.  1970 called.  They want their hoops back.  Those earrings and white lipstick and baby blue cream eye shadow shoulda stayed on Laugh In.  Speaking of fashion, bad, BAD hair, Ned, bad, tragic, horrific hair.  Bad hair.  Bad.  The top of half that forehead should NOT be seen.  It can’t be said too many times by enough people:  TUCK IN THE DRAWERS, BRENDA!!  Pantaloons should NOT extend above one’s jeans no matter WHAT they’re doing in Paris.  Those people are crazy anyway.  What a tacky broad.  When Joe, my son, was a teenager, he took a Barbie doll and made a dress for her from black electrical tape.  It was, of course, very B&Dish and stuck right to her little malformed body and little did I know Brenda would wear the same outfit to her “It’s Alive” party at the Quartermaines.

You know, Carly is getting pretty good at going to her room when she’s told to.

So lemme get this straight.  Jax just walks into (what is now) Skye’s house?  What is it about ex’s that they have carte blanche to just stroll into the house whenever, where ever, however?  Especially if *they* leave?  One of my favorite scenes in the wonderful movie, “My Blue Heaven” is when Rick Moranis beats the shit out of Daniel Stern and literally throws him out of the house (asking him to open the door for them as he tosses him) and tells him to KNOCK next time!  Hate Jax badly right now, that’s for sure.  I hope Skye knocks him on his ass.  I’m still waiting for her to give that cane a good kick and say, “Pfft.  Bite me, Corky” after he calls her a snake or asks her to “take it back” like she’s five or something.  He set the rules for this game when he rejected her and let Brenda lay all over him in ICU.  After that, it was on!  I hope she takes him out big time and I do not mean to McDonalds.

and a little bit of

to GH for all the good beefcake they’ve been bringing our way!  Cameron and Ric (if that’s his name) are a welcome addition to the eye candy factor and I, for one, would like to just, well, kiss those guys hello.

Loved when Scott pointed Taggert in the chest and he cut him a look.  I’m still curious about why the DA is running the PCPD.

OK, let me get this straight.  Sonny pays people a wad of money to help Carly.  Shit, pass me the dishtowel, already!  Let me help you with your coat, honey.  Can I get you that designer crack pipe off the top shelf?  Need the remote control?  Want some Krispy Kreme doughnuts?  A kidney?  Anything at all?

Lastly, I absolutely cannot believe that Sonny had the audacity to walk into the Neonatal ICU asking Alexis for HELP at a time of crisis.  Is there possibly a more self-involved person on the planet??  Pfft.

The One About Soap Couple Names

The One About Soap People
Who Look Like Real People

The One About Jason and Liz
July 2002

Best of the Journal Weekly Column

Katrina's "On the Soap Box" columns

Help!!  Please take a moment of your time to help
EOS stay alive by clicking on the Uncle Sam
link or the smiley if you've read Uncle Sam already.